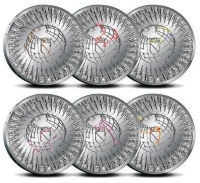 There is another 5 euro coin available and this time they minted another small batch of colored coins. The number of colored coins is 1000 and this is a little bit more then the previous set with the colored tulips, which counted 750 sets. Again the entire batch sold out within a day.

The colored set of the Utrecht five euro coin exists out of 6 silver coins where each has a little colored detail. For each country/area that signed the treaty of the Peace in Utrecht there is a colored coins present in the set. For each country the coloring that is used is based on the countries flag or arms from 1713. The countries that participated were France, Great Britain, Spain, Portugal, the Netherlands and Savoy.

Even though these coins are not legal tender this remains a mystery when you review the website of the royal Dutch mint. Clearly they want to sell the colored coins quickly without any hassle. They announced (*) the coins on their website with the specifications stating “Nominal value: 6 x 5 euro”. In the news item announcing the new coins the colored set is mentioned right alongside the rest of the coins. A bit strange because the colored coins are legally viewed worthless and should not be considered legal currency.

The (official) colored coins sold by the royal Dutch mint until now:

(*) Sadly the royal Dutch mint does not preserve the content of their website. As soon as a product is no longer available in their shop all the details related to the product disappear.