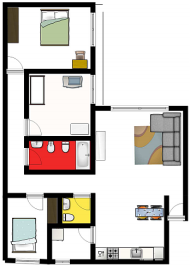 After living for quite a while in the green part of Las Palmas, Ciudad Gardin (right next to the worlds richest person, the owner of the IKEA) it became time to find a bigger place. Our new apartment is a bit more in the center of the city. The building is well knows as the old x-rated theater but now the building is change to have nice spacy apartments in the center of the city. We now have a garage and a lot of shops nearby.

Alex is very excited because of the move. He is very enthusiastic and sleeps with difficulty. For sure this new found source of energy is because he is now noticing a lot of moving activity around him. He now has two weeks to settle down in his new home and then there will be a big party. His first birthday!!!