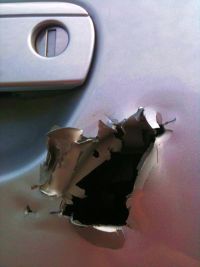 During our visit to the Netherlands we spend a couple of days at my brothers place. He had just bought a nice new car, an Audi A3. He had the car for only a couple of weeks, and it is usually parked right in front of his door in a quiet residential area in the Hague. Everything seemed okay, but something very unexpected happened. One morning we suddenly encountered a big gaping hole in the door, just below the lock.

Ofter filing an online report at the police department and the insurance agency we visited a mechanic and got some very clear information. He hole was clearly made to rob the built in navigation. The thieves were interrupted during their work, and left just after making the hole, and before entering the car. The car window was still intact, because breaking the windows triggers the alarm. A big hole in the door is ignored by the alarm system and allowed the thieves to open the door without triggering the alarm..

Taking the car home without repair would imply that the navigation system would for sure be stolen that night. The car was left at the mechanics to repair and reinforce the door, but the previsions are not very good.

We also received some unofficial information. The thieves will be back for sure. The door will be reinforces but probably it will not be enough, of the thieves will return with bigger equipment. The navigation system is said to be worth just 10 euros in the south of Europe. I doubt if this is really the price, because a new navigation system costs around 1500 euros. The current solution is a big metal bar connected to the steering wheel, which extends to hover before the navigation system. Hopefully this will deter any thieves.