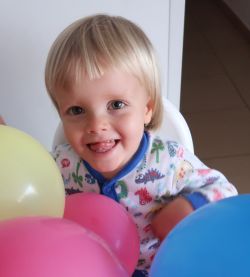 Alan is growing very very fast. Not only his physical size, but also mentally there is a lot of progression. Partly because he is being stimulated almost full-time, but also because he is a very smart little guy. He understands almost everything he is asked, and it does not matter if you ask him things in Dutch or Spanish. He also asks things himself using a limited set of vocabulary in both Dutch and Spanish.

This birthday was celebrated with a big party, and Alan quickly understood that it was all about him. The was clearly very pleased with all the gifts. Up to the next year!