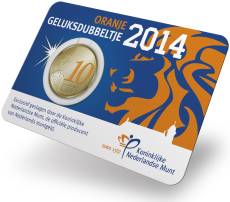 Luck can be used to make products more desirable. Good luck charms, horse shoes, four leave clovers, they have all found a good market with people seeking good fortune. The royal dutch min is also trying to get some of the action in the good luck market. After the 2012 good luck 10 cent coin issued especially for the football competition (and failing to be really lucky) there is now a new 2014 lucky 10 cents coin aimed at good luck throughout the year. The coins are sold for 4.95 euro so they should provide a healthy profit. The coins can be recognized by some orange paint over the number 10 and they are sold in the popular coin-card format. This discrete layer of paint also renders the coins legally worthless.