Progress can’t be stopped and it looks like we’re moving ever faster to a new digitally oriented society. Payments are done using plastic and the future promises even more advanced possibilities using your phone to pay for things. Everything turns digital which makes things easier and faster. Except where there is a power outage. In that case we still need to rely on old bank notes and coins.

To keep the market for coins alive the Dutch mint is researching different approaches targeted at the various market segments. One of the markets identified is the collectors. Coins collectors have by definition access to financial means, and most are happy to spend a little bit to keep their collection complete.

Since a few years coins are packaged in a credit card format. A little piece of added carton which raises the price about 400%. The same way old coins are release in a new package, and for a much higher price. These carton versions are very popular. More recent the Dutch mint also started experimenting with colored coins. These have existed for a longer time, but now they have reached a more official character; specifically because they are being sold by the Royal Dutch Mint (KNM). 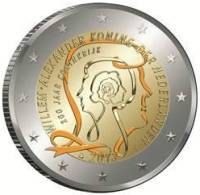 Since a few years the KNM started creating colored coins. Last week there was another one, and this time it was a colored two euro coin minted in honor of 200 years of Dutch kingdom. The 1500 sets of colored coins were sold out within the hour.

It still remains unclear what is the status of the colored coins. According to the KNM the coins are “Official 2 euro 200 years Monarchy 2013 in Proof-quality with color“. The coin might be official, but legally it is a modified (painted) coin, which means it cannot be used as legal tender. Based on the low amount of coins being minted it seems clear this colored set is solely aimed at collectors.

The (official) colored coins minted so far by the KNM: