Once again it is time for the Berg-kroniek, a brief recap of the past year. It was a strange year for us because in April I left my family in Spain and I started a new job in Leiden at Naturalis. It was a very difficult choice, but it was necessary because we were confronted with a situation where I was unemployed and Ana had contracts that lasted a month. A situation with a lot of insecurity that we solved by splitting up our family. 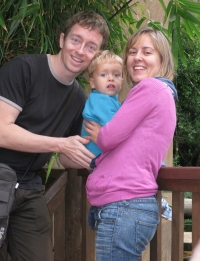 In Holland I could stay with my parents for a couple of months. Working at Naturalis was nice and I helped create a lot of websites and a mobile app, the dierenzoeker. Still it was hard being away from my family. I worked from home a couple of weeks, and spend all my holidays there, but saying goodbye every time was hard on Alex and even more difficult for his father.

A medical error caused Ana to have quite a bit of problems with her eye sight. Hopefully her eyes will get a bit better but it will take months before we know for sure. For Ana there was also good news. After six years of temporal contracts her contract has finally be changed into a fixed contract. Finally the job security she deserves.

Alex is doing very well. He is growing very fast and he is already going to school a few hours every day. His mother thinks that his character resembles his dads character. He is a happy kid who like a little bit of mischief every now and then. If Alex wants something he’ll get it, or he will make life hard for his parents. A typical two year old kid and a typical Berg. Just as you might expect from the lineage holder.